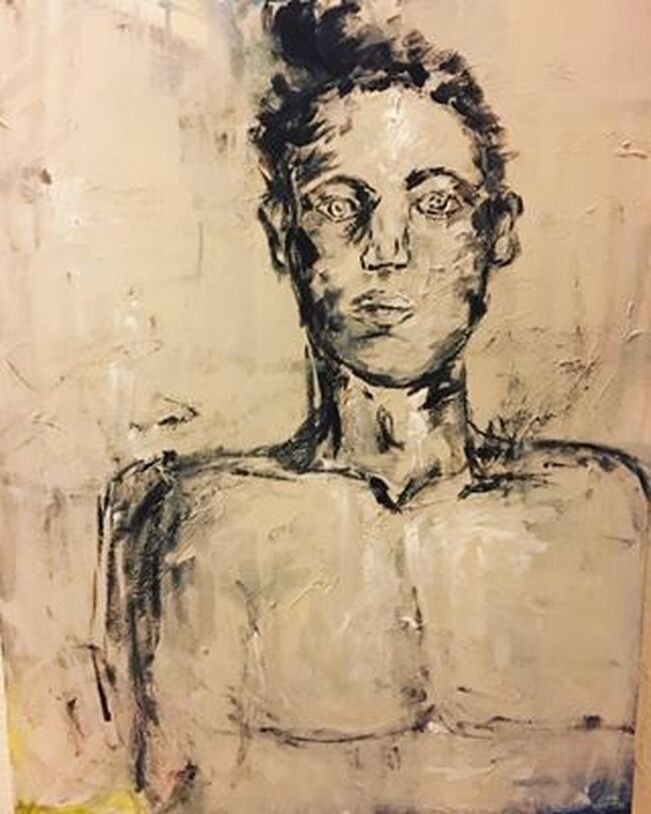 George Kalamaras
“God made me a poet, and I made myself a librarian.”
—Fuertes
So where is The Book of Hard-Earned Bread? they seemed to ask. How is it you knew how to write our working class selves inside out? Such primordial yelp. As if the zebra part of our heart was neither black nor white. Could lie down peacefully with an otherwise hungry hyena. Could never be indexed, that is, or cataloged with what kills.

But she took it in, Gloria Fuertes did, each day, as she hunched not over the lines of Góngora, Jiménez, and Machado, but over the wooden drawers, cataloging the hard crust of labor as if Franco was only a menu choice and not that mandatory glass of pond scum we all knew him to be.

A malady of daily work? Trim my bread? Give us this day our medicinal beard?  Forgive us, of course, our egresses, as we depart orderly from the hunger-stung we are.

I saw her scribble something onto nine torn pieces of paper, then place them in my sewing basket, her seamstress mother had said. And before bed, I returned to my sewing to read them:

The bull gores me;

I love your beard;

Until we are all rubbish;

Which means Jupiter has more moons than Saturn;

It will snow crucified Marys;

All of me and more of the moon

And later, in the break room of the library where she worked, Fuertes took the full twelve minutes and told each worker again and again:

If the camel passeth through the eye of an American dollar, we might all be as alive as dead could be;

There is a compulsion like a gravedigger. We are dead or all dying of the mere thought of death, dying, died;

Quick, someone hand me a Timex watch. My father has died of too much brick laying in Madrid;

I am a working-class woman—here, write me in and out of this poem

There was a ghost number haunting her apartment. The wandering soul of the waiting-to- be-dead. A five turned into a nine, part of which was scraped off by day laborers to make it look like the letter F.

Every now and again there is some joy, she told us, an inside-out, a deepening of cherry sting in the lemon branch breaking shadow across our back.

Look, here’s the newspaper account of the contents of an ostrich’s stomach (next to her obituary) the day Gloria Fuertes died:

A photo of Gloria Fuertes riding an ostrich;

Sure, we never learned to fly, but have you?

Oddly enough, we always root for the bull;

Roots, leaves, seeds; now we will forever be the ostrich,
pressed like African violets in an encyclopedia of the dead;

Sew the stomach back up; darken the light; leave us be;

We wish we were poets—that we could fly and not just giveth of our meat;

OKAY
George Kalamaras, former Poet Laureate of Indiana (2014-2016), is the author of fifteen books of poetry, eight of which are full-length, including Kingdom of Throat-Stuck Luck, winner of the Elixir Press Poetry Prize (2011). His most recent book, That Moment of Wept, will appear this fall from SurVision Press (Dublin, Ireland). He is Professor of English at Purdue University Fort Wayne, where he has taught since 1990.
​
About the work: “What makes a poem a poem? Is it lines and stanzas only? Or is it something other, something strange and darkly lit that our recognizable poetic forms can’t quite name? And is the attempt at naming reductionist—less, say, than what the universe could possibly hold? Do such questions ask the wrong way of the mouth? Do our questions slay, flay, betray what our mouths ache to know? Should our questions be koans, and our koans tongue-toughened vowels? Should we sit in a hut and hear the universe unfold through the wind in the wind, say what the Zen monks say, that “fish fly in the trees and birds swim in the ocean”?”
The Art

“Stoicism” Acrylic on canvas 16’' x 20'' 2014 sold ​
​Pj Holliday is an artist and writer. She studied studio art at The University of Houston where she earned a BA in creative writing with a concentration in poetry and won the “Outstanding Honors Thesis Award” for 2014. As an expressionist, Pj explores both abstraction and surrealism in her art and always seeks to divert from her own previous approaches to art.  Pj’s first art exhibit at Art Forums in Kemah, Texas  was a response to how environment disrupts or enhances the creative process. In her second exhibit, which showed at Bacchus wine bar in League City, Texas, Pj presented a series related to feminism and beauty redefined through surrealist images of the female form. Her third art show in February of 2016 at Cut and Color Bar Salon in Seabrook, Texas, was held in conjunction with Sophia Collelo and showcased her latest work in abstract expressionism, focusing on emotional responses to color and space. Her artwork is regularly purchased and she works on commissioned pieces. Pj is currently an MFA candidate at Regis University in her thesis semester, where she is studying creative writing in poetry. Her poetry has appeared in the San Jacinto College Literary Magazine.
​