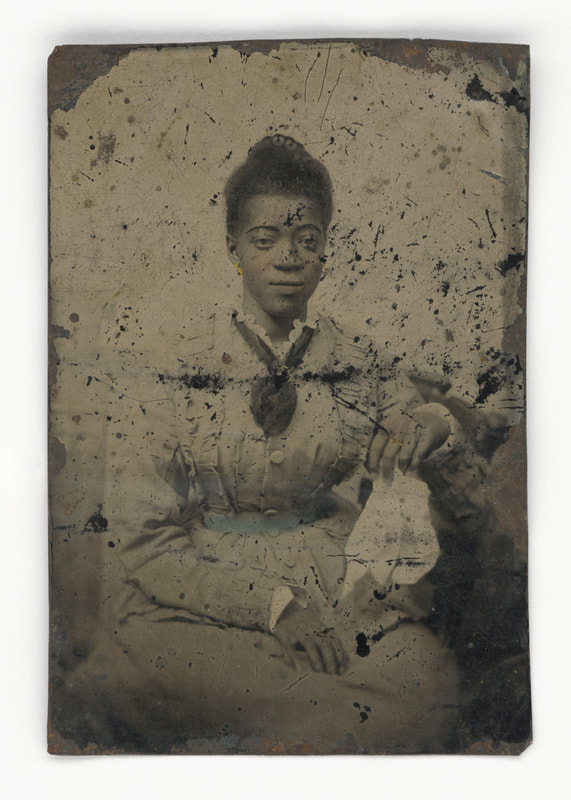 "Tintype of a woman"; collodion and silver on iron with lacquer; 3 3/8 x 2 3/8 in.; 1856-1900; open source from the National Museum of African American History and Culture
black.girl.magic

“What happens to a black girl who is too anxious to ever feel like magic?”

My best friend tagged me in a Facebook video tonight.

“Friends with Benefits” by Jae Nichelle

Let’s break it down.

And third, magic-“a set of beliefs and practices distinct from religion and science”
I don’t even know what that means.

Together: “The concept was born as a way to "celebrate the beauty, power and resilience of Black women", as described by Julee Wilson from HuffPost, and to congratulate Black women on their accomplishments.”

White/Caucasian
Black/African American
Asian
Native American
Pacific Islander
Hispanic
Other
Is that all you’ve got?

Who would have thought that seeing “Select All That Apply” would be the highlight of my day?

or
what I’m trying to say is that
it doesn’t apply to me because my race is invisible
which is funny because I’m brown
brown like the uniform of the UPS driver,
but only in the summer
brown like but I’m still pale in the winter
like trying to go through the airport without getting “randomly selected”
for a more thorough body search
like staring at me and my white wife when we are holding hands at the grocery store
like paying more attention to me walking through the electronics section
brown like
my mom asking why is there a video camera pointing at only the “ethnic hair care” section at Wal-Mart

or maybe
brown, but privileged
so
taupe?

“Can she still be fly
with wings that tremble?”

“Can she forget the lifestyle of an ant?
The fear that no matter what she does she is in danger of being crushed
What I’m trying to say is
My anxiety doesn’t like to be made into metaphors
but she is constantly reminding me of how easy I am to crush.”

Am I strong enough to carry the world on my shoulders?
or even to hold the other side when you are?
or,
stop fucking trying you’re never going to make it.

“What happens to a black girl who is too anxious to ever feel like magic?”
I’m the only girl, the only brown girl
I call them my boys--
They call me their Mocha Goddess.
I’ve never asked why

The license plates of the car I smashed when I met you are sitting in front of my face like an engagement ring a widow pawned to feed her kids
When I nearly wrapped my car around that tree in the ravine,
I was working as a receptionist at a collision center.
I had my car towed there,
only because I knew the tow company’s number by heart.

What he meant to say was
“You’re lucky you didn’t die.”

I don’t remember 1999
or my first kiss
Freshman year I had the Papa Johns number memorized
and met you sophomore year
I thought you were pretentious.
You thought I was a bitch.
And neither of us were wrong.
We were roommates for two years,
still friends.

I never had the heart to tell her
the boy she was sleeping with sexually assaulted me.
she wouldn’t have believed me anyway.
He’s a teacher in Oklahoma.

She fucked me in the library,
a random weekday.
I fucked another in the darkroom.
Graduation day.

Move on and move up,
or in my case become an underpaid slave to the state
secondary trauma

The other day I met with an autistic child.
He had been abused by his mom and her parental rights were terminated.
He is getting adopted by his grandparents
and really likes dinosaurs.
That was the majority of our conversation;
“That’s how big a T-Rex’s eggs are!”
“REALLY? What does this say?”
He sometimes answered questions in reverse;
and while it was difficult to understand,
I get it, kid, I get it.

He wasn’t even alive in 1999.
I want to be the person who remembers.

I make note of when their birthdays are.
None of them were.

there’s the remnants of a bug on the wall next to me,
ear cleaner solution for cats,
a blue tie dyed bandana,
silicone rings, a coaster,
a LEGO set of the Louvre,
a bag of gifts I’ll never send,
photographic prints from 2011,
an empty film canister,
a silver wash bucket,
a wrapper for tissue paper,
and a magnet.
a sympathy card I never sent,
a half empty wine glass
I guess I’m not a glass half full person after all.

Last week they diagnosed her with psychogenic seizures,
but also potentially epileptic ones too?

PTSD can cause imprinting,
and some of the physical and psychological damage can never be undone.
Research has been done that states,
“Several pathological features found in PTSD patients overlap with features found in patients with traumatic brain injury paralleling the shared signs and symptoms of these clinical syndromes.”
In English that means some of the things you experience as someone with PTSD
are the same as someone whose head has gone through a car windshield
and as a result, they’ve never been the same.

What does it feel like to be constantly in a state of fight, flight, or freeze?
Like there’s five fifteen hundred pound boulders sitting on your chest,
and you’re struggling to breathe,
but you don’t die…
when all I did was lightly touch your hand.
Like a car careening off a cliff
into a river of alligators,
(my preferred way to die)
and then you’re drawn and quartered;
but you’re still alive
and all I did was ask you what you wanted for dinner.
Like a, like a, like a…

highlighters,
Sharpies,
pens with the caps I left off when I was a child,
a phone charger,
five hundred blank notebooks
one hundred partly written in notebooks,
an awl,
a sewing needle,
a clear, plastic ruler,
seaglass collected on a vacation to the Outer Banks,
car keys,
a framed piece of paper with poetic lines of a play,
playing cards and an old pill bottle,
a candle, a t-shirt, a box of seltzer water
a jacket, a hat, a litter box
license plates I wrote about earlier

I don’t know why I don’t have PTSD
but I know I write about my car accident a lot.
I am lucky I didn’t die/ I am lucky to be alive
About the Author

Kirslyn Schell-Smith is a biracial photographer and writer based in the Shenandoah Valley of Virginia. She received her BA in Studio Art from Denison University and her MFA in Image/Text from Ithaca College. Her work vacillates between poetry and stream of consciousness thoughts, utilizing intuitive and improvisational strategies to explore the confluence of queer and racial identities against geographical, historic, and personal backdrops. She prefers to write when she’s not expecting it; in her psychiatrist's office, in her car in a parking lot, in between clients, in bed at 2am, standing in line at the grocery store, and while avoiding the household chores.
​
About the Work

"I desire to live in a world where we don’t have to fight our brains. I desire to live a day where I’m not concerned with juxtaposition, contrast, dissonance, loving a place and hating a place — not harmony, per se — but a space, a place, with a light tug this way and that. It might best be explained by a swirling puddy, of several different colors — shiny, iridescent, that once pulled apart can contract, snap, shrink back into place with little resistance. I write because I desire to to not feel upside down, unless I am on a roller coaster with an empty stomach; a roller coaster that I chose to be on, not one that I’m strapped into against my will — but since I am, I might as well enjoy the ride. I desire to keep the constant, my constant.

I wrote "black.girl.magic" after watching a video my best friend shared with me on social media and wanted to have a conversation about it, with it. I wrote "something about 1999" because I couldn’t get the phrase out of my head. II is a section of the longer poem of "something about 1999" that aims to mimic thought processes surrounding traumatic events and the aftermath of those. It is flashes of present images, experiences, and memories, flipping through someone's brain as if they knew they were dying. In my case, there was not enough cognizance or ability to play those memories in my head right before a car accident. This is me remembering, having my chance to flip."