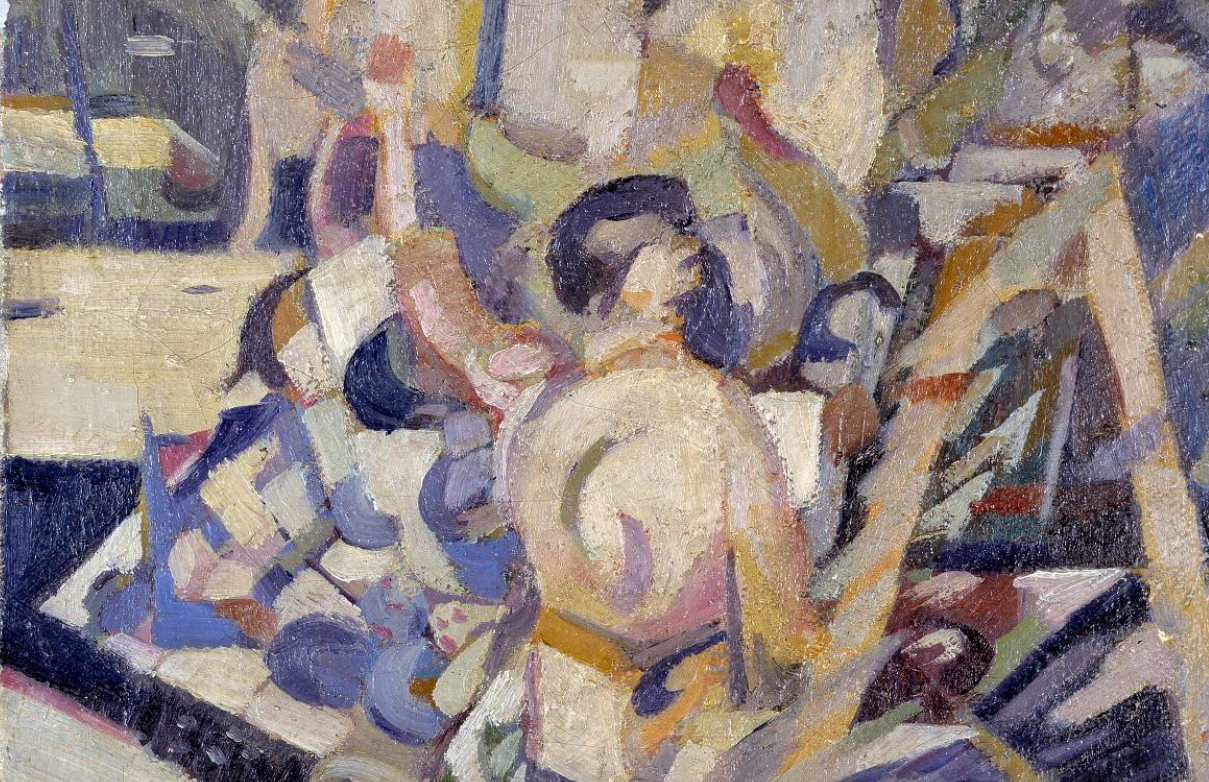 "Cubist Analysis" by John E. Thompson; oil on canvas; 12 1/8 x 10 in.; 1915; open source from the Smithsonian American Art Museum
Whatever have you heard the echo is rule of plastic. Down on the carpet. Up on the walls. Heaven waits for the ruffed tourniquet. There was a measure of it. All scattered. And this one a sea of shards. Of opening ups. And the other ones turning into squares. Into diagonals. A circular myth of things to come. That have already passed. Bringing the brain with them. The whole apparatus. Shimmying into a bow. A bright morning of toothbrushing and how you dos. And the books of the shelves have nothing to say. Have said all they need to say. Lumped in a corner. In a memory of having smoked, a fine morning leading to a disjunctive state. A cataclysm or a stroke of luck. And the reeling of parting and coming back together again. A thing advertised in books and movies. Like a lung breathing. Or a world and its wind. The signs of disintegration and the signs of new things coming into being. Gone are the sparrows of the intimate dialectic and come is the field of many voices saying the same thing. With micro differences we can rely on to distinguish each voice and each mood. Each thought and its analogy to something better. Imagined better but never quite coming into place. Dissembling on one end as it assembles on the other. As fit constructions. As if energy had us playing with dark power. Since every thing destroyed as it is coming into being. Every soul, every icy stare from the other side of convenience. Convergence. For being for a brief interlude. Among the many catastrophes that inhabit life. That are the machinations of life. Because when I walk over here I have destroyed the person who stood over there. The identity that it was that was every body standing there from the beginning. Which never occurred.
About the Author

John Schertzer lives in Brooklyn, NY, with his wife and fellow poet Kathleen E Krause, their two evil genius sons, Liam and Declan, and a dog, Rex. His poetry, crossover and fictions have appeared in a number of venues, most recently Big Other and Danse Macabre. His novel Bellamonia is forthcoming from Spuyten Duyvil.

"I wrote "The Node Dancer," I believe, in response to a number of fictional posts I had put up on my blog imagining how others in NYC were living through the pandemic, and remembering always that, though we are capable of embodying innumerable imaginary/fractal selves as a result, not only of the fictions we read and write, but with everyone and everything we encounter, we are still limited in our reach of another‘s experience. I think The Node Dancer tries to address both the lack of a central node of identity, and also that limit of reaching and understanding others. Both of these factors I believe are at the base of any kind of ethics."