​That One Thing with the Wine 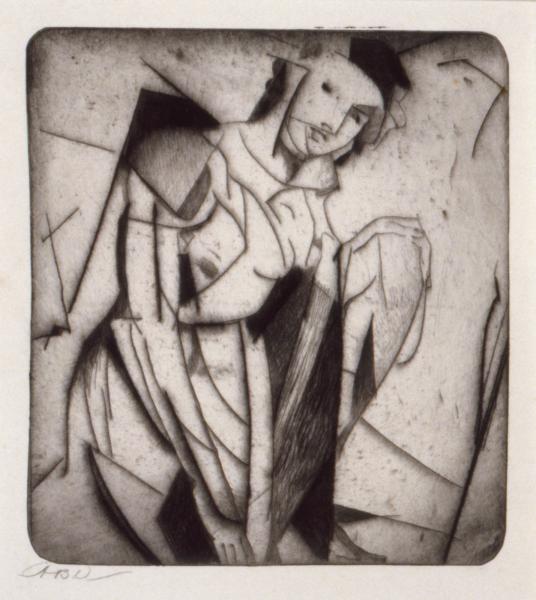 "Figure in Glass" by Arthur B. Davies; drypoint on paper; 6 1⁄4 x 5 1⁄2 in.; 1916-1917; open source from the Smithsonian American Art Museum
The first slice is coin-thin and clings to the side of the knife. Jesus Christ, you’re not slicing bananas for toddlers. Keep this up and it’ll become a running joke with the host family. One of the daughters, passing her sister in the hallway, will offer the grim warning, “Careful—mom’s patience is thinner than Katie’s banana slices right now.” The grandmother will be diagnosed with cancer, and when the dad breaks the news, he’ll say, “Her chances are slim,” and a grief which doesn’t know what to do with itself will tug at his lips and tempt him to say it.

Well, alright, there’s a lot of banana left to go and plenty of chances to redeem yourself. Hopefully not too many chances. Hopefully fewer chances than there would be if you persisted in your current slice-width. So of course, like the dumb bitch you are, you overcorrect, and the next slice’s width is nearly equal to its diameter. It’s the better mistake to make, I guess—now you just have to decide if you want to split it up into two slightly-undersized slices or one slice of appropriate width and one tiny slice, but I’ll leave that to your discretion.

The hostess is standing next to you and pretending not to watch and wondering if your mother never had you cook with her growing up, which she didn’t, but that was because she was trying to give you a carefree childhood which many people are deprived of and which, moreover, is none of your business, Jennifer. When you arrived at their house earlier that evening, and the husband had just poured himself a glass of wine, he asked if you’d like a glass too—it was a new bottle, a brand neither of you had tried before. “Take a sip first,” you said, “And then I’ll decide,” but he misheard you and thought you were asking to take a sip of his, rather than asking for his recommendation. He had already begun an uncomfortable, “Oh, um…” by the time you could correct his misunderstanding, which means that there were about three or four seconds during which he really believed that you were the type of person who would ask for a sip of an acquaintance’s wine at a dinner party, and which, consequently, means that you can’t be alive anymore.

Third time’s a charm, and you finally manage enough fine motor skill to produce a decent banana slice. However, because of the curvature of the banana, one side of the slice is slightly wider than the other. Frankly, you’re not in a position to be too particular about that yet—you can circle back to it at the end. If you had wanted a sip, you would’ve said, “Let me take a sip.” A consonant like t is pretty unmistakable, and from the context clues alone, it should have been clear that you were asking for his opinion. The whole thing is a PR disaster, but nothing that four straight hours of absolutely flawless social behavior and a perpetual, winning attitude can’t fix.

But honestly, who are you trying to kid? It’s not enough that he knows you weren’t asking for a sip. It’s not enough that the wrong impression is corrected. The problem is that the wrong impression existed for an actual period of time and that it will never not have existed, no matter how much you do to counteract it. Oh God—Oh God, already, as you’re thinking about it, you can feel the exchange being relegated to that category of memories so agonizing to you that you can only look at them obliquely, through at least one degree of linguistic obfuscation. Where, instead of reliving the memory of the class presentation in which you grossly overshared, the whole thing is reduced and encoded in the title, That One Presentation. Same goes for That One Lady At The Vet’s Office and That One Thing On YikYak and That One Time With The Hickey. Jesus Christ, you’re even lying about the titles, that’s how pathetic you are. Hickeys. Plural. And really, giving them distinct titles at all is dishonest, because usually, all that you manage to mentally utter in reference to any of them is That One Thing.

The hostess says, “I’ve washed the raspberries,” and hands you the bowl for the fruit salad.

“Oh—good,” you say, which is a stupid way to respond because it sounds like you expected her to wash the raspberries and would’ve been pissed if she hadn’t, but you’ve paused too long now to say “thanks” without it sounding like you’re amending your response rather than clarifying it. So kick yourself about that for a while, while you scoop out a bruised section of banana and throw it away, and then become suspicious that they’re all judging you for food waste and once you’ve performed a couple recitations of kill me kill me kill me as penance, slide the banana slices into the bowl and cringe at the rasp of knife against cutting board. When you all move to the living room, clutching your bowls of fruit and cool whip dollops, indulge in just a moment’s more shame, and then, if you possibly can, try to taste the fruit. This is the best possible version of your life.
About the Author

Katlyn Tjerrild recently graduated from Baylor University with her Master of Arts in English and is currently teaching English at Merced  College and College of the Sequoias. In addition to creative nonfiction, she writes poetry and fiction. Her work has been published in The Penn Review, Meridian, and The Southampton Review.

"“That One Thing with the Wine” was written in 2019 after an objectively lovely dinner party made subjectively horrible by self-consciousness. This piece is essentially an attempt to translate into English the punishing, often-incoherent voice of social anxiety, and hopefully in doing so, to reveal its absurdity and defang it a bit."