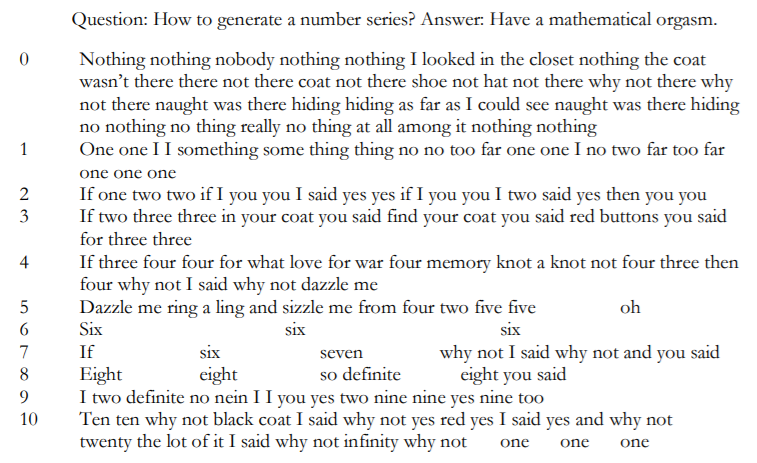 Cynthia Kneen (pronounced neen) ─ writer-poet, theater artist, educator, long-time practitioner and student of Buddhism. I’ve been a scholar, worked high and low jobs to support my journey, helped co-found Naropa University, did voice-over for Soulful Media and Tendril Films, and published vocal and written works with Sounds True and Hachette. In 2011 an opportunity to join an elite three-year Jacques Lecoq-based school of physical theater in Italy crossed my path. I leapt, immersing myself in mime, masks, acrobatics, improvisation, performance and character-based states of play, with a big emphasis on comedy. Returning home as an elder, I began what I am doing now with great joy ─ teaching, writing, and performing memoir and short pieces, hybrid style.

About the Work
​
"I wrote "Set Theory Orgasm" after reading the Danish poet, Inger Christensen, to see if I could generate a piece around #’s without doing the work of Fibonacci’s mathematical sequencing. I chose a sexual event from a female’s point of view. Unlike the elegance of Christensen’s work, this piece is sensual, humorous, low class, almost clownish, maybe even tragic, certainly tender and absurd. It’s a great deal of fun to read aloud and perform. Will she get pregnant. Maybe he’s a flimflam man. What if she gives him the keys to her condo. Her alarm is high, but her resistance is not. The piece is part of a wallpaper performance series. Like wallpaper, continuity is there.  When something ends for her, she lives her awareness from a slightly different point of view. Performing the piece in a sensuous, incantatory style suggests life’s sweet-sour rhythms both soothe and bite us with their inevitable impermanence. Also, in letting go of our most personal and intimate core protections – oh, give him the code to the checking account, why not? – we might gain perspective and right ourselves with humor and compassion, if not wisdom."