by Adria Bernardi
the space of the house becomes understood,
further integrated into the mind and body,
it became less strange, after an absence
from it, and a return to it – after re-in-
habiting it.  the space of this house – a bungalow –
has become more familiar during these days
when the others are absent (for a few days –
this remains the time of motherhood) there
is a kind of calmness that reminds me of the days
before I was a mother – that is to say
there is no appointment at the end of the (school) day
no appointed time at which I must be present
that determines the space
inside the house – changes the condition
whether it is silence – or absence – this
kind of solitude in which it becomes
possible to find the house, the body,
the mind again.

the space described above – of such silence --
was at the top of the stairs looking at
the Palladian window at night.
In the middle of the night.  When
everyone else was asleep.  It was not
a frequent occurrence, but one
that ran in tandem with insomnia –
times of waking up – after sleeping – distressed
or not – or times – it must have been
during that first seven weeks of a newborn –
(But then I would not have been sitting
at the top of the stairs, surely, but
only taking care of the baby and then walking
like a sleepwalker drawn by magnet
past the window back to bed & sleep.)

I sat on the top step – and looked at the way
the moon made shadows, complicated
shadows, (patterns) through the window.
I sat, content.

After living in the house for twelve years,
I began to detect the mathematics
of the window, began to understand them:
its divisions & to see
how many divisions time could be figured
into by the segments within that half-circle –
or circle if you consider that its shadow –
its double, made a circle.  I began to
wonder where these windows were made –
and made originally – and wondering whether
like the window-makers of the cathedrals –
these window-makers were asserting a theology.
Clear, concise, and complex as the mind.
And shadow.
And I saw 2 palladian
windows & one
palladian window
over a door --
down the street
from a building named
monbijiou
the morning after the
night I dreamed
my grandmother was standing
in a vestibule — there were
others off to her right
and on my left in a room
She was wearing
a dark blue
navy blue
suit
jacket
and
skirt
and she opened her arms
and embraced me and started
crying (she didn’t cry)
and said, in italian,
I thought I would never
see you again.
I’ll tell you now about the window that emerges on my wall, the wall in front of you
an arched window,  with palladian window pane
left, at sun rise,
and how it moves from right to
left along the wall, just above the desk
as the minutes go by
and disappears just for the day,
when I’m not watching. 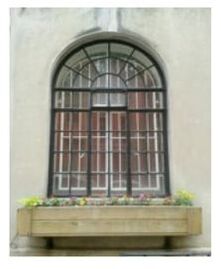 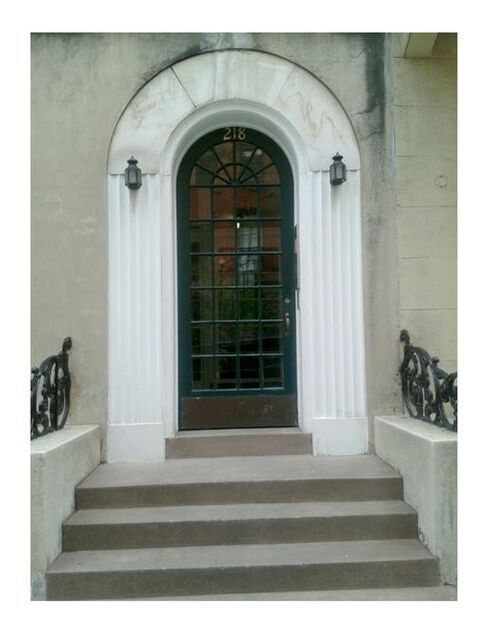 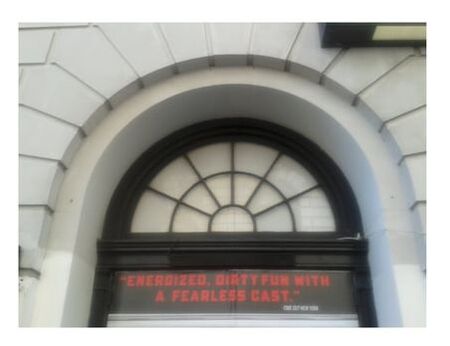 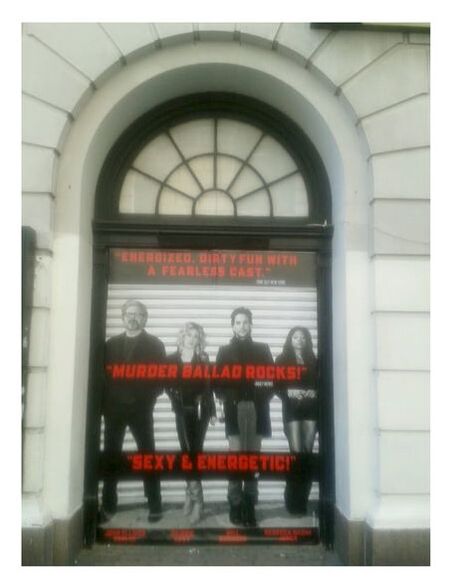 Former Tamany Hall Building, 100 E. 17th Street, New York City. May 6, 2013 with cellphone.
The parent, the generative person or essence,
or ideal, or condition, which holds the space
or concept for the child, or the other, holds the space
or concept, or ideal, or condition, so that the child,
or the other, may return to it, unconditionally,
across time, in time, and out of time’s constructs


I saw light coming through that window
at all hours of the day and night
making shadows on the wall and floor
at angles, a clock.   Arcs.   Seasons.


I saw light going into that window
going into that house, carrying in groceries
from an asphalt-covered driveway,
impossibly routine, walked
under the window and past it and light
stopped me in my tracks.


I saw light from inside and outside
that window and now
wherever (or very often) I see that window, its
form repeated in however likely or
unlikely a place, I am stopped
in my tracks, or surprised, or feel a pang,
turn-of-the-century-before house,
or pleasure, amazement, wonder, for
concept; I would not be seeing it now
if I weren’t outside the house; I wouldn’t be
seeing it had I not dwelt
inside.


The window gave me a way of looking at light
from within and without
coming inside and      going inside
the house, angles, bisected, refracted
divided into partitions, in arcs,
that lasted of some long durations
during the day, morning or afternoon,
or in the middle of the night,
or that were over in an instant –
or patterns that were made on the wall
through that window at that moment
that invited me only to sit or stand
and see it. 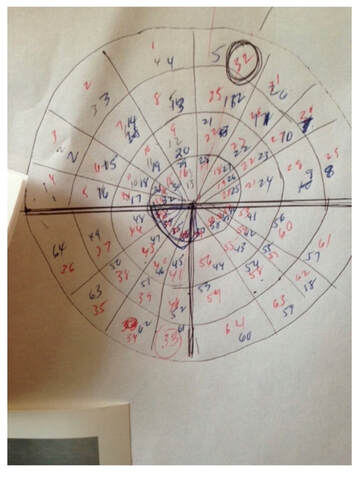 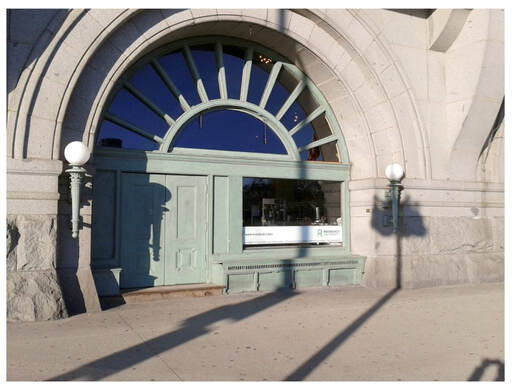 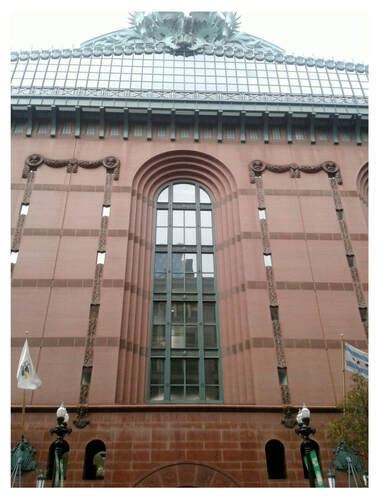 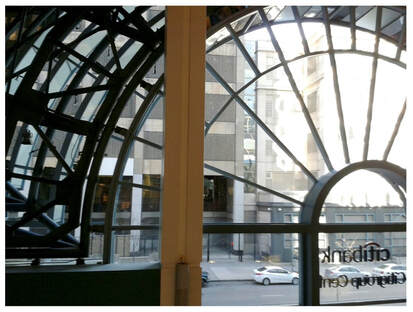 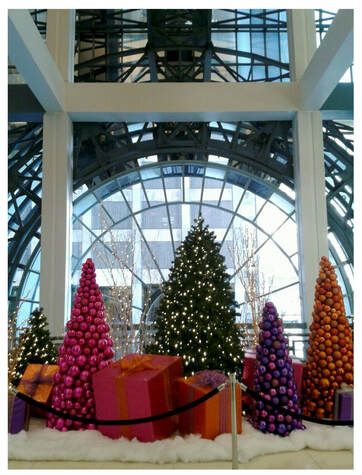 Ogilvie Transportation Center, Chicago, December 9, 2013
That window with those quadrants, those segments
seen four seasons over twelve years, with these
eyes, from the inside of the house, from landing,
from top of the stairs, from bottom, from mid-
point, in motion & paused, at night & during
the day, at various hours, had the effect of
removing the chip on my shoulder, of knocking
it off – of tipping it – the scales – until they
fell away again and again through the/   that seeing
through it
inside to out
and now seeing it again from outside to in.

The son of Piero dalla Gondola he was born in Padua and began humbly as a stone mason, enrolled in the Vicenza guild of bricklayers and stonemasons in 1524. Then, in about 1536, he was taken up by Giangiorgio Trissino, the poet, philosopher, mathematician, and amateur architect, who encouraged him to study mathematics, music, and Latin literature, especially VITRUVIUS, and nicknamed him Palladio (an allusion to the goddess of wisdom and to a character in a long epic poem he was then writing). In 1545 Trissino took him to Rome, where he studied the remains of ancient architecture for two years.
The Penguin Dictionary of Architecture

“Palladio, Andrea (1508–80). The most influential and one of the greatest Italian architects (see PALLADIANISM) . . .” John Fleming, Hugh Honour, and Nikolaus Pevsner, eds., The Penguin Dictionary of Architecture (London and New York: Penguin Books, 1980), 235.

Image of Palladian shape is the iMac hard drive of previous desktop computer.

“‘the immensity of these silent stretches of space! . . .’” Gaston Bachelard, quoting Henri Bosco from Malicroix, in “House and Universe,” The Poetics of Space. Translated by Maria Jolas.  (Boston: Beacon Press, 1994), 43–44.

The quotations from Gaston Bachelard, The Poetics of Space, can be found on the following pages: “In the tiniest of hatreds, there is a little, live, animal filament.” 44; “And faced with this pack, which generally breaks loose,” 44; “‘but the flexible house stood up to the beast.’” (quoting Henri Bosco, Malicroix) 45; “The inhabitant of La Redousse must dominate solitude in a house on an island where there is no village” 46; “The house acquires the physical and moral energy of the human body.” 46; “In this dynamic rivalry between house and universe, we are far removed from any reference to simple geometrical space.” 47; “Et l’ancienne maison, / ” Jean Wahl, Poèmes, 48.

Palladian window over the front door of The Arthur Johnson Memorial Library, Raton, New Mexico. Raton is the largest city nearest Dawson, New Mexico, where 263 miners died in on Oct. 22, 1913, in Stag Canyon, Mine 2, and where 123 miners died on Feb. 8, 1923, in a mine explosion in Stag Canyon Mine 1, owned by Phelps Dodge Corp.  Among those killed were immigrants from Italy, Greece, Mexico, Austria, France, England, Russia, and Japan.

Sketch of the Palladian window made while writing Obbligato: The Life and Times of Mrs. Francis Home, Towards a Theory of Healing, (In Three Parts).  Unpublished manuscript.

West End Middle School and Gymnasium, eastern side, Nashville, Tennessee. Cellphone, Nov. 19 and Nov. 20, 2013. “West End High School in Nashville, Tennessee, was built by the WPA during the Franklin D. Roosevelt administration and opened on Sept. 7, 1937 with 823 students in grades 10–12 and 30 faculty members. The school remained a high school until the spring of 1968. . . Since the fall of 1968, West End has served as both a junior high and then as a middle school,. . .” (West End Middle School website, 2014).

The Chicago Window, The Auditorium Building. “This architectural treasure is a paradigm of the Chicago School, featuring a steel frame, lightweight terra-cotta exterior, the distinctive three-part “Chicago window,. . .” . . . (http://www.roosevelt.edu/CampusCommunity/Chicago.aspx)

Wrought-iron Lunette. Henry Crown Gallery, Art Institute of Chicago. Photo of lunette and text taken with cell phone Dec. 2, 2013.  The text reads: “BURNHAM AND ROOT / Above left: Lunette from the Main Entrance of the Commerical Building, 1885–86 (demolished 1971) / 319 SOUTH LASALLE STREET, CHICAGO WROUGHT IRON Gift of Cleveland Wrecking Company, 1972.812 / The development of LaSalle Street as Chicago’s financial district in the 1880s created a need for speculative office buildings such as the Commerce Building. This particular structure was never a financial success, however, and was converted into a hotel in the 1930s. The lunette, designed by John Wellborn Root, incorporated a spiral, a device he frequently used in his ornamental details.  This large-scale lunette was located above the doors at the main entrance to the building.”

“Oh night without objects”  Rainer Maria Rilke, Notebooks of Malte Laurids Brigge, in Bachelard, “The Dialects of Outside and Inside,” op. cit. 230.

“there over the front door of the public library in Raton, New Mexico, /” in Calisto typeface.

“The backbone of the window. . .” from Obbligato: The Life and Times of Mrs. Francis Home, Towards a Theory of Healing, (In Three Parts). Unpublished manuscript.
About the Author

This piece began with the premise that I had learned to look at a Palladian window in ways that corresponded to a period of my life in a house where I had had the unexpected good fortune to live for a long period of time. In the researching and writing, I began to see the Palladian window in different moments of time, place, and context and came to understood that that my ways of perceiving had been transformed by living in the presence of this window; it had changed the way I understood inside and outside, dark and light, and the kind of understanding that arrives over time in reverberation. This piece was a long meditation and I tried to reassure myself that a shape would eventually emerge. At moments when I felt discouraged about the endeavor, I would see a Palladian window, sometimes while walking or in text or in a dream. With its formality and aesthetic argument for unity, harmony, and clarity, the window often presented a paradox, appearing in a context that was far from the ideal. Once I understood that the Palladian window as an external form that had become internalized, and which needed to become externalized, I understood the window itself would reveal the form. "Palladian" will appear in a volume of multi-genre essays to be published by New Rivers Press.