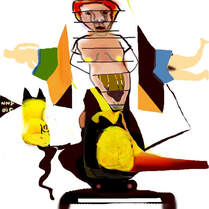 Carol Radsprecher Carol Radsprecher received her BFA in painting from Hunter College, CUNY, in 1985. In 1988 she got her MFA in painting. Carol has had several solo shows and numerous group shows. She is a restless visual artist. A painter for many decades, she "discovered" the wonders of Photoshop eight years ago and finds this medium very well-suited to her need to work rapidly and without storage concerns. Her images have appeared in many publications, both hard-copy and online. She is a Brooklyn native. Her Web site: http://carolradsprecher.com.