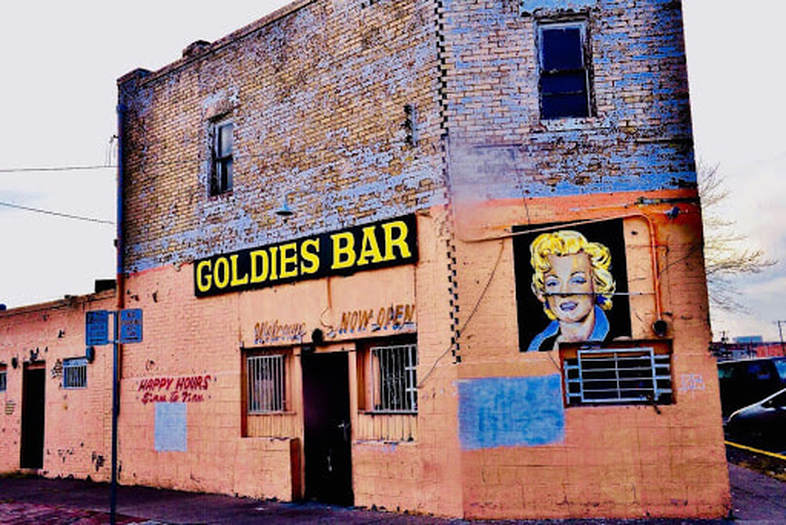 1430 Myrtle is gone from the city charts, but it still has a warm place in local barflies’ hearts.

Jimmy Pro landed up here a decade or so ago. Foraging the Borderline, he was drawn in by the allure of Marilyn and the adjacent sub barrio, resplendent with its decaying funk. For a lensman in search of poetic inspiration, the dingy bar was a perfect place to conjure up a late afternoon, laconic stare; to unwind from shooting; and to jot down a few trigger riffs, teased out by ice cold Lone Star. Happy Hour can often be a poet’s salvation until it just isn’t.

Jimmy spent most of a decade sifting along The Line, honing his images, both electronic and literary. His voluminous photos further sharpen the clarity of his incisive poetry. “The Border Elegies” hang heavy with Jimmy’s prickly historical view of our enigmatic southern boundary. For sharp, visiting insight, de Tocqueville doesn’t have jack shit on Jimmy!

El Paso, for Pro, was the citadel for his wandering self assignment. It’s gritty West Texas ambiance and resplendent culture  titillated his most deeply held, creative instincts. Comfort, contentment, and creativity anchored him here like a rock for nearly ten years.

But the place that he warmly refers to as “The City Of The Future” is changing. He recognizes this gentrification, having sniffed its putrid spillage elsewhere in places like Gotham City’s Chinatown. Now, even this traditional barrio is tainted by ever  seeping progress. This insidious creep is what finally took out a mini neighborhood icon like Goldie’s.

The place earned a sketchy score of 83 on its last Health Department sanitation inspection in May, 2013. Marilyn was still smiling, welcoming customers in for spicy tacos and tawdry conversation. But Goldie’s shelf life was nearly spent. Cheap beer down here is plentiful, and real estate near downtown was beginning to have some serious, long term prospects.

Jimmy finished The Border Elegies, but just in time for his joint to suffer the wrecking ball. When I finally showed up, he took me to another downtown dive bar, The Tap. Here, may be found, possibly, the best juke box in Texas. I was also really inspired by the endless flow of cold Tecate. So I churned out a hot story about a mythical gunfight and our eventual escape down an endless alleyway that formed a seedy, urban slot canyon. Some editors liked it, and I even provided a dramatic supporting photo for publication.

I never got to quaff a brew with Jimmy at Goldie’s, though. But if I had, a yarn featuring Pancho Villa buying a round for the boisterous house might have spewed forth. Pancho would have probably met up with Marty Robbins, you know, “out in the West Texas town of El Paso”! They could have had a bar shoot out with the relentless Federales who had been hot on Pancho’s trail since early in the 20th century. Then, I would have provided a cool image to support my storyline. Likely the same hip photo seen here.

I am just proud to have ever off centered  Goldie’s in my viewfinder. For his part, Jimmy Pro is content to have found poetic synergy in a small barrio icon, now lost to time. Gone from the charts ...but never, ever from our hearts.
William C. Crawford is a writer and photographer based in Winston-Salem, NC. He invented Forensic Foraging with his colleague, Sydney-based lens man, Jim Provencher. Forensic Foraging is a throwback, minimalist technique for modern digital photographers. See ForensicForaging.com for a full description. Crawdaddy also often writes Flash Photo short stories which develop a storyline from a compelling trigger image. ​

​About the work: “I wrote this piece to commemorate the compelling Border poems of Jim Provencher. His incisive journey along our southern boundary reveals a side of the American Southwest that few have experienced. He invited me to share some of his odyssey in El Paso and elsewhere in Texas. Like Jimmy Pro, I was inspired to produce solid photographs and, later, to write off the wall short stories turning our exploits into creative non-fiction memoirs. Goldie’s was more than a place. It was a symbol of an important slice of time filled with creativity, and most of all, friendship.”