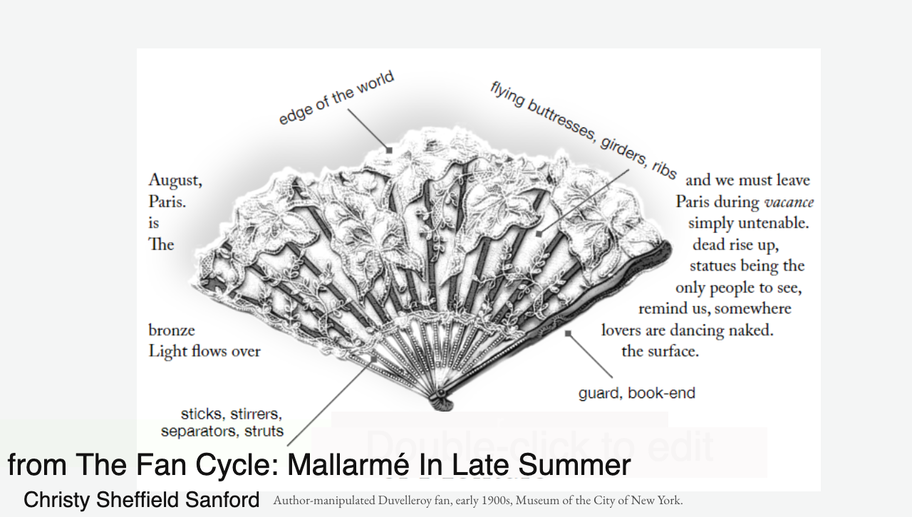 from The Fan Cycle: Mallarmé In Late Summer

Christy Sheffield Sanford
Orchestral sound, scintillating piano. Lulu, did you leave me
for a bright star? 16.8 light years away? Is the culprit
Altair – that hot, incandescent body rapidly spinning
in Aquila the Eagle? Does your lover live in a mass
of dust and gas, whimsically called the cloud of G?
​The G-cloud. Does he touch you there?

The fan, refreshing breeze assistant, stirs a gust of air. Pushes her upward, a foot or so off the ground – typical state when confronted with adoration. The fanatic, that faithful attendant, dreams of favored status.

She raises and lowers her fan, exposes one blue eye, one green, a cherry painted upper lip, full lips, tutta la frutta lips, Arcimboldo lips, lips of a thousand women on a tray. Would you like a glass of Champagne? To accompany your amuse-bouche.

The fan is an implement of mass distraction. This we know.

Flip the guards open, whip them closed. Now you see me, now not. Plus the odd microcosm of the accessory itself. When folding into the muck, in this endless poker game, raise-you-one-and-double-cross, careful you don’t lose sight of

the early 19th century woman-hunter, rifle
slung over a shoulder, dead bird in hand;
boy and girl frolicking round a water pump,
like a Maypole, yelping dogs at their feet;
or the enchanting 1905 Duvelleroy creation:
French netting, now torn, embroidered
with feathery thistles in silver ‘n cream.

Tell me the story of just how that fan was ripped. And was your bedroom door open or closed. In Georgia, we have laws about that.

She fidgets, runs a finger over the ribs of the monture, all the parts of the edifice that give the fan structure. She unfurls her mini-landscape. Tonight we thrill to a scene of bullfighting. In the background, women in mantillas. Foreground: matador fanning his cape. Picadors on horseback lance the bull’s shoulders – enraging the animal for the last time.
​

When splayed, tortoiseshell struts like webbed feet, are digits for all to see. Where are they wandering  tonight? Fusion Point? Yesterday, lightning struck the water governor. All night men have been digging so we might wash, slosh, love.

I would have liked Stéphane writing me in white ink on the gold rim of a fan, the fan painted with  scattered roses. When closed they form a secret bouquet. The hidden words and flowers enjoying their tacit, illicit banter.
The rest of Sheffield Sanford's Mallarmé Fan pieces can be found in Inverted Syntax's Issue Two, coming February 2020.

​Christy Sheffield Sanford is the author of eight small press books including The Cowrie Shell Piece (Baroque and Rococo Strains) and The Hs: the Spasms of a Requiem. She is a winner of a National Endowment for the Arts Fellowship in Poetry. Her digital animations have appeared in numerous literary magazines including Atticus Review (Poe's Purloined Molars) and Amp (Nadine's Shoulders in Moonlight). "Nadine" was also shown at the 2018 Electronic Literature Organization Gallery show in Montreal. Sanford was the first Virtual Writer-in-Residence for trAce, formerly at Nottingham-Trent University. Some of her web-based work is being archived at Washington State University. She holds a Masters degree in Creative Writing and Interarts from Antioch University.

​About the work: "For over thirty years, I’ve been joining genres and disciplines. I am a Francophile, and in February was chosen for an artist residency in Cassis. I have for several years been interested in how images can enlarge or interfere with text. The purpose is to add multiple connections or associations – to create surprises. That is a common element in most of my recent work. For years, I’ve been intrigued with Mallarmé’s formal experiments. He not only wrote the source of endless fascination Un coup de dés jamais n'abolira le hasard, he also wrote eighteen poems on fans, given to women he admired. I’m quite drawn to body art, sexuality, freedom and new forms, and that’s the focus of my “Mallarmé Fan Cycle.” Recently, I’ve been finishing a book about dance theater called The Ostinato and the Furniture or Stiffen. The primary subject is the choreography of Pina Bausch for Tanztheater Wuppertal and the critical resistance in the US to hybrid works."
Merleau- Ponty on Stéphen Mallarmé