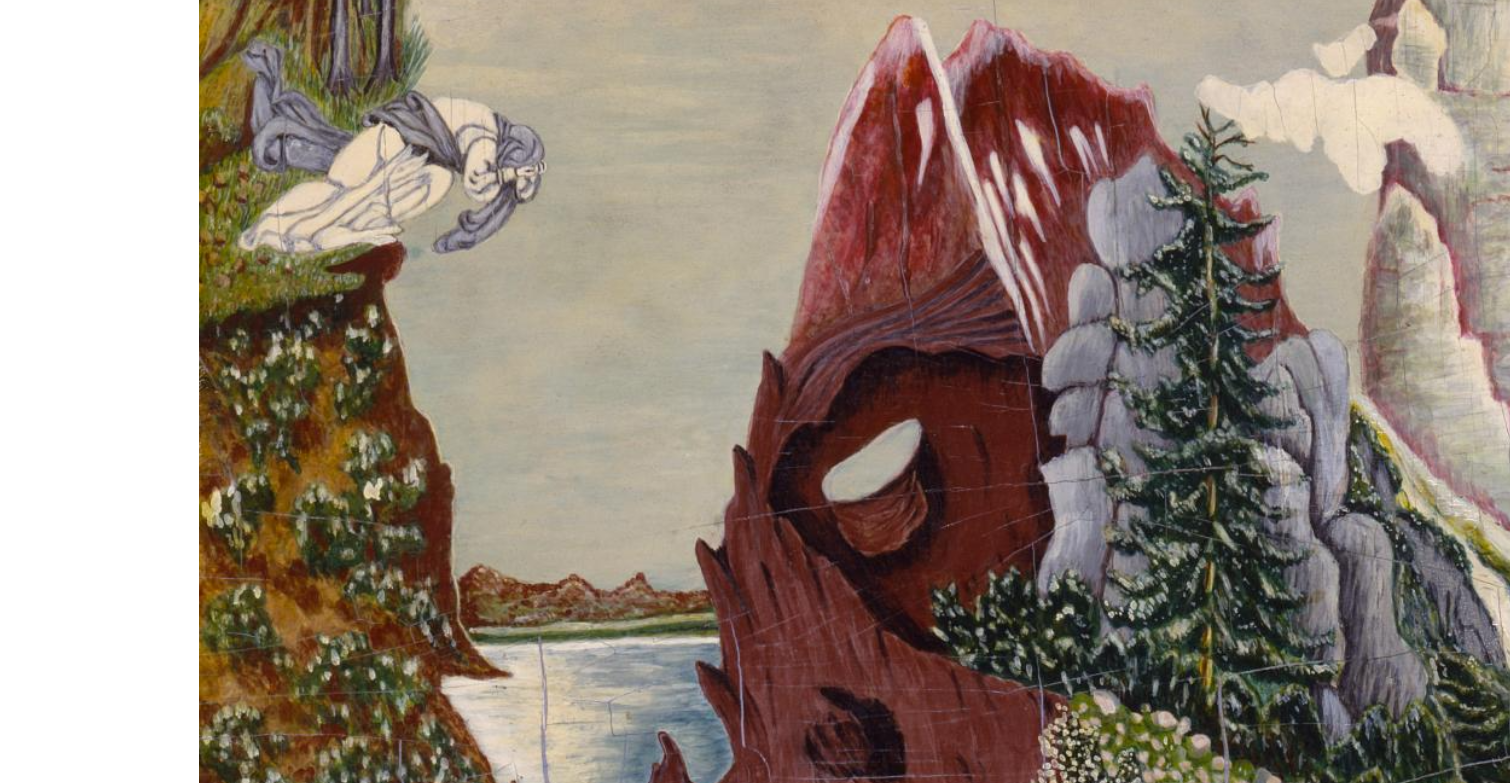 "Nirwana" by Max Reyher; oil on wood; 15 5/8 x 19 3/4 in.; 1928; open source from the Smithsonian American Art Museum
The evening dogs are on the loose again
Chasing the neighborhood kids up into a tree
We stay there all night carve our names in bark
We play rock paper scissors to see who’ll climb down
We braid each other’s hair we sip the dew from leaves
We’re hunkered low in the understory dark
It rains the next morning and we take off our clothes
Beat our skinny chests like the apes we long to be
A year later the dogs are still circling below
Their blue black fur shimmers in the slow sun
They teach each new litter of pups to hunt
They have wills of their own they have designs
One of us learns the language of sad birds
Another becomes a rush of green wind
The rest seal their eyes shut with red sap
The rock is for power the paper is for words
The scissors are too heavy for our little fingers
Have you ever accidentally read the same book twice
Sometimes you can almost picture how you’ll die
You see a car the ditch rain through the window
I climb up out of the dark to see the neighborhood whole
It’s the shape of a mirror it’s the shape of a hole
This is where you grew up all those years ago
You’ll return home once you climb down it’s getting late
I can’t remember what else happens but I know
The colors of the world are a reflection of the sky
I know the patient dogs will wait me out to the end
About the Author

J. D. Schraffenberger is editor of the North American Review and professor of English at the University of Northern Iowa. He is the author of two books of poems, "Saint Joe's Passion" and "The Waxen Poor," and his other work has appeared in Best of Brevity, Best Creative Nonfiction, Mid-American Review, Notre Dame Review, Prairie Schooner, and elsewhere. He lives with his wife, the novelist Adrianne Finlay, in Cedar Falls, Iowa, with their two young daughters.

"As a child I suffered a recurring dream of being chased by packs of dogs, dangerous and muscular shapes in the dark, impossible to hide from but rarely seen clearly or whole, only flashes of fur and fang. It's not difficult to analyze this dream as a perfectly healthy and natural psychological rehearsal of a deep human fear of death and dissolution, so vivid to a little boy learning to touch the terrible contours of mortality. But those dogs were — and are — real, more real than the flesh and blood dogs of my awake life, not just because they continue to circle my subconscious mind — figment, fantasy, phantom — but also because I believe they have wills of their own that I cannot fathom, designs I will never understand, however much I might try to interpret them as literary symbols of human mortality, mere metonymies for the wild. I have never believed in a theistic god — not least because those theologies are too legible to me, not mysterious enough for the strange beauty of the cosmos — but I do believe the dogs are there, waiting."