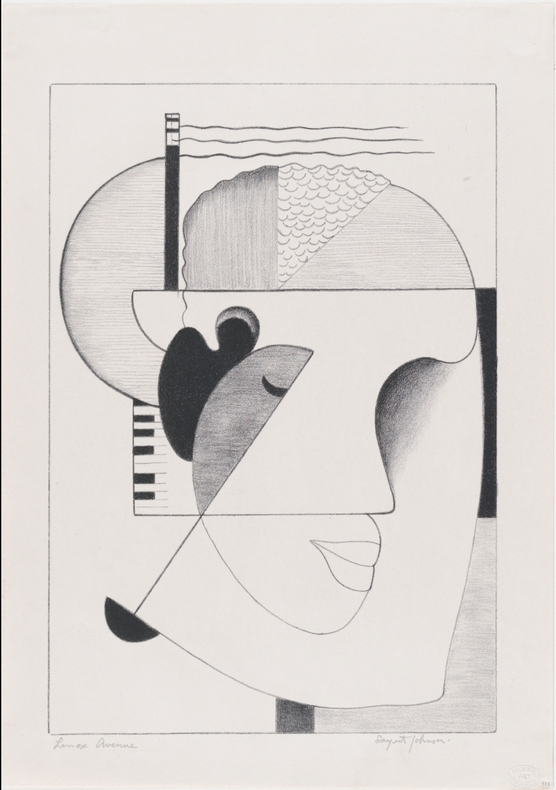 "Lenox Avenue" Sargent Claude Johnson, Lithograph, 12 1/2 x 8 1/2 in., 1938. Open source from The Met.
​An anomaly
and one without apology
I come from those on the short stick of the monopoly
Last left to find and discover what the world been known about
And then concealed
Leaving me to sift through these diluted truths
And doled out to me is the character of ill repute
I’m the only one still baffled by how I am treated
for the tusks of elephants and Harambe
seem to see more justice than my kind ever will
The seldom compensated
Consistently silenced yet constantly the topic of conversation
Always at a loss
That’s stolen property
Kings and queens stolen as property
Treated as commodity
For profit
And made possession
Ever present is the oppression
& my humanity is always up for debate
My humanity is always up for debate
No matter how I walk on the narrow
No matter how tall or how straight
I am the criminal
The most debased
And they’ll say things to me like….“well, you know there’s always been slaves”
And it takes
A great deal of bravery in every reaction
Composed of a whole only known is my fraction
Composure key to my survival cuz my every reaction
Determines my fate in these incendiary times
You gon have to pardon me you see I predate
The data suite
The database
I go unmentioned like the Sudanese pyramids
I’m comprised of Negro spirituals, Kwanzaa celebrations and street talk
Nina Simone lyrics, Quincy Jones rhythms and sweet stalks of corn on the cob
Buttered down pepper paprika and diva in my feature
And I just want to give a word of homage to the congregation
For what it’s worth
I grew up in the church
Methodist turned Pentecostal
That went to Catholic school
a whole mess
Mean I seen more white Jesus than a little bit
For mine it was forbidden to be literate
For centuries
Like how would we have texted with no concept of the letters: the parentheses
I precede the refreshing of feeds
Yes,
The type to set a precedent
A different element
Of a previous time
Prism in the light
Schism on the line
May come off as unfamiliar
To the blind, unrefined
But its fine
My vibration is unfamiliar
Long road ahead in my progression
She’s a caterpillar
but I'm iller
Descendant of those that stood upon holy ground
Profound
Although,
Been captured, held, suspended then told I was otherwise
Dissected
Splendid
Even in a state of suspension
Not the Hottentot
But the hothead
They shot hot lead and decapitated
Whole cities, entire towns eviscerated
And my knees raw from all this bending down
Gathering all these pieces of me up off the ground
Curse to this concrete, asphalt
Been spit upon, barked at, then told my oppression was my fault
Fighting for freedom but never having it
Fighting for freedom but never having it
Fighting for free breakfast and clean water
A decent life without the slaughter
Denied my own prosperity
Yet here I am ever present
To memorialize my legacy


I’m Betty Shabazz with a blazer on and the bang out
Queen Latifah in the role of Cleo finna bang out
Sojourner in my truth aint I a woman?
We got the same mouth
I’m Harriet – rifle close to my side ready to aim out
Mahalia when she sang out
I’m Toni jotting notes down for Tar Baby
There was all kinds of jigaboos and porch moneys and tar babies
When I was a baby
There were bones in noses in cartoons
I would come to memorize
I know more HidEE hideE hos than one should know
And that was all before oatmeal
At once the product and the pest to be fumigated
At once the most often copied and the most humiliated
Overdone and understated

I gotta glow feel
And it’s so real
That they come in mobs to extinguish it
Utterly flummoxed, perplexed
By the fact they can’t relinquish it
All while consuming my Ill Street Blues
My Go Tell It on the Mountain
My Purple Rain
In my most natural state, I soar and I reign
Pushed to the periphery yet I remain the main
You gon have to pardon me
When I started out the disks were really floppy
Not just icons for save
I'm from before the stream
I’ve seen the pound sign from whence the hashtag came
We’d play tic tac toe in that frame
With a receiver to my ear I’d talk until the dialtone came
I’m showin my age
My bottom and your bottom nah they not the same
For my life they’ll place on me significant blame
Furiously fighting
Only furthering
To ignite my flame
For it is when I’m at my darkest that I'm my most brilliant light
So fearful of my fury that they’ll shoot me on sight
Black this magic I inhabit
Burning bright
About the Author

Devynity Wray is a writer and visual artist from Queens, NY whose work makes the trajectory of the African diasporic heritage, experience and legacy prominent. Ever inquisitive about history and how human ecosystems interact with one another, Wray’s work is an excavation of Blackness steeped in the wealth of knowledge the artist has acquired from her understanding of the Black American experience. Enamored with art at an early age, Wray attended F.H. LaGuardia High School of Music, Art and the Performing Arts where she studied as an art major. As a writer, Wray earned her chops on New York’s slam poetry scene making the Nuyorican Poet’s Café her stomping ground. She was a Nuyorican Poet’s Café Grand Slam Finalist and team member in 2002. Her poem “Black Girl Manifesto” was published in Letters to a Young Sister – a bestseller by Hill Harper. She received her BA in Africana, Puerto-Rican and Latino Studies from the City University of New York’s Hunter College and currently attends Lesley University having recently been accepted into their MFA for Visual Arts program.

"I wrote "BRIGHT" while in an art incubator with my creative cohort - Mother Mercy. We were charged with creating work grounded in activism and spiritual growth. It is somewhat of a battle cry for me, a call to resist."