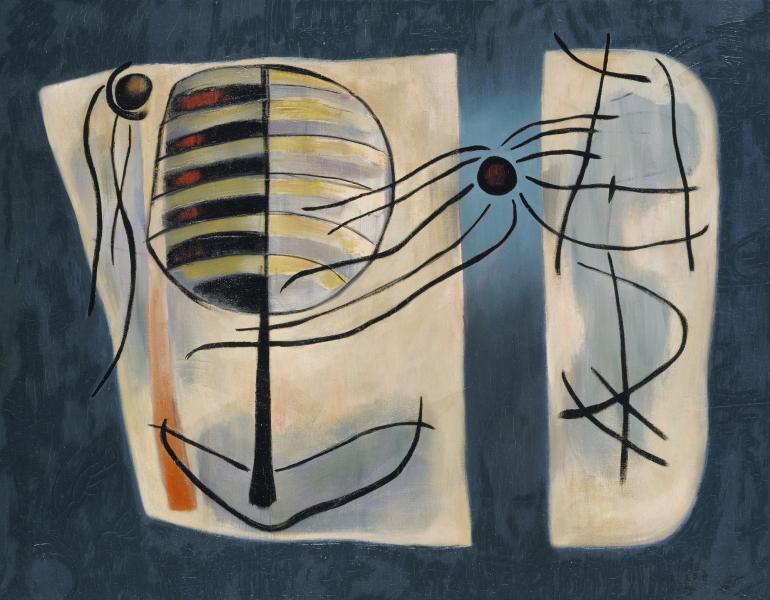 "Untitled" by Rupert D. Turnbull; oil on canvas; 28 x 36 in.; 1938; open source from the Smithsonian American Art Museum
The night I put all of my belongings
into Google Translate was the same
night I decided to change my name
to “Area.” My first word was
“tree.” My first phrase was
“Dollar Tree.” My first anxious
uttering was, “Is it just me
or did that tree bloom earlier than
usual this year?” My first love
said unto me, “Area,
you are the least involved in capitalism
person I know.” My first step was
aimed at a butter dish. My first day
of fast was followed by congratulations
from all the women in my life. The lonely
well, the sinkhole, the space to fill, the
sweltering summer heat, the lake,
the binary, the nothingness,
and the reflection of my grief
walked into a bar and said, “the
translator really fucked this one up.”
About the Author

Grace Ann Rogers (she/they) is a songwriter and poet originally from rural northeast Kentucky. She is currently an Undergraduate English major at the University of Louisville. She was a summer resident at the Kentucky Foundation for Women in 2018, and served as poetry and experimental/hybrids editor of the online literary journal Miracle Monocle throughout the 2018-2019 academic year. Grace is a recipient of the Leon V. Driskell Award for Creative Writing and her work was named honorable mention for Sarabande’s Flo Gault Student Poetry Prize. Her poems have appeared in The White Squirrel and Lammergeier.

"Boundary" is part of a larger projected called Into Nowhere which explores the relationship between landscape, language, and colonialism in Eastern Kentucky. This particular poem attempts to unravel some ideas surrounding translation, borders, and the blundering, baby-fawn legged inadequacy of English when used to talk about a place it was not created to describe—a place its speakers colonized.