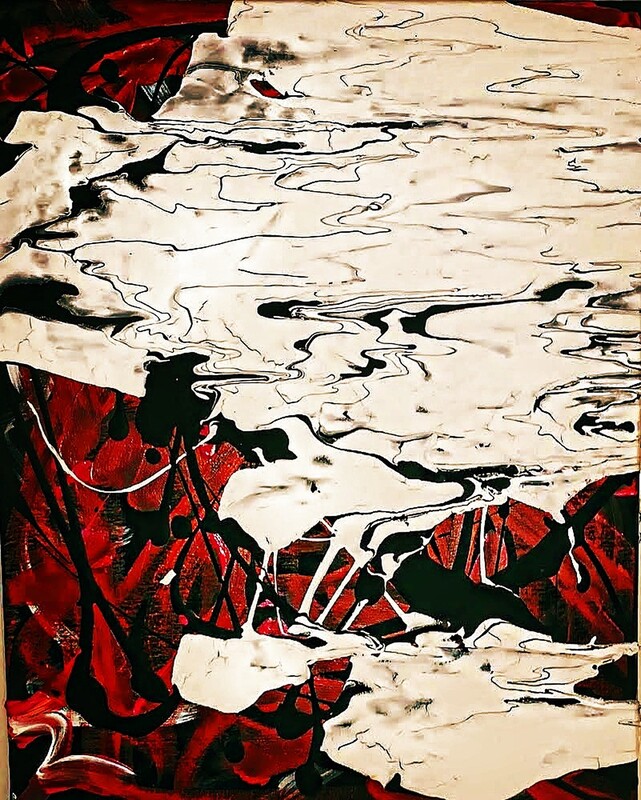 "The Ice Shelf and the Magma" by Desiree Dufresne, 20" x 16", acrylic on canvas
the storm opened us
-for e.l.
[mobile version]

André O. Hoilette is a Jamaican-born poet living in Denver, Colorado. He is a Cave Canem fellow and former editor of ambulant: A Journal of Poetry & Art and former Asst. Editor of Nexus Magazine. He currently pursues MFAs in Fiction and Poetry from Regis University. Previous publication in Stand Our Ground: Poems for Travon Martin, Bum Rush the Page: A Def Poetry Jam, and the Cave Canem 10-year reader, milk magazine, Cultural Weekly, South Broadway Ghost Society, and other journals.

About the Work
​
My aim is to undermine what is accepted and taught currently.  It is my thought that the publishing world as well as the academic, knowingly or not, creates classist and supremacist divisions between writers and readers. I work to undermine that.

"one duppy deh 'bout" comes from a larger project about a tragic supernatural entity named Clothilda, who was once human. The larger collection elaborates on the mythology of flamewomen and other entities known in the Caribbean and W. Africa.

"the storm opened us" is from a series of COVID poems. It attempts to show the isolation and longing for humans interacting during quarantine.

"fear of the police" is also from a series of poems about the value (de-value) of Black lives. The series attempts to show the intersection of black lives with a society that does not value the lives of them but rather seeks to destroy them.

Desiree Dufresne is interested in exploring emotions, memories, and lived experiences through the endlessly kaleidoscopic lenses of artistic curiosity, critique, wonder, and spontaneity. The artist's unique sense of texture and composition brings the viewer into another world of perception wherein colors and shapes tell a story that is at once intensely personal to Desiree, and meant just as much to be creatively interpreted by every viewer.

The self-taught artist works most frequently in abstract expressionist paintings using acrylic, oil paint, and found items. She loves experimenting with different media and unusual objects, exploring the strengths and challenges of each one. Her style is confident, irreverent, and at times absurd, but every line, scribble, distorted shape, and unusual color is applied with studied intent.

"The Ice Shelf and the Magma" (20" x 16", acrylic on canvas) is an exploration of the emotional textures of being consumed and overwhelmed by desperation while struggling to find hope. The two opposites — the cold ice and the seething magma — fight for sovereignty, each taking on elements of the other.