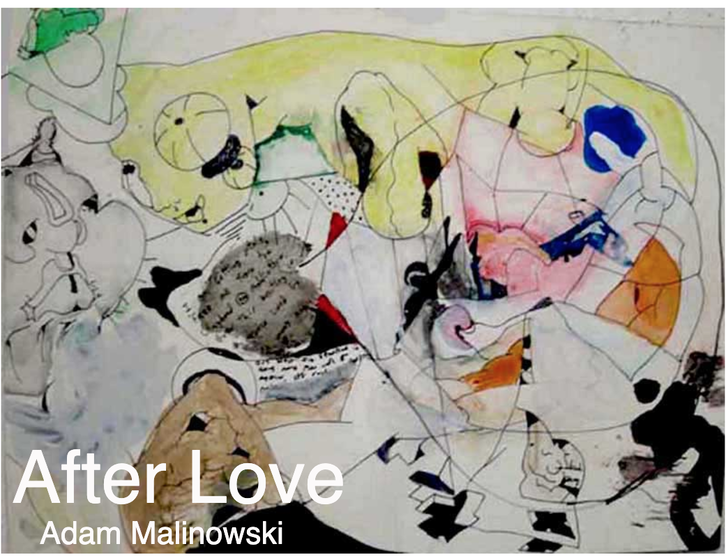 2019 Sublingua Prize for Poetry Runner-Up Selected by Dorothea Lasky
A 2020 Best of the Net Anthology
FINALIST!

Adam Malinowski
After the idea of love has receded,
a low fruit dangles in gardens
of land mines and cluster munitions
speaking in alien registers I pray
out my window
to some version of myself
left behind O! my precious stones
smoky quartz, Lake Superior black rock
begin to fade with me
under discarded omens
now, back on Woodward, where people cross
carts fresh with produce, berries, nuts
walking down to the marina
where commerce moves at snail-pace today
and even data slows
as fiber optics break transmission
and salaries all but dry up
meanwhile, the cell doors of Huron Valley unlock
and we are singing Beyoncé
just for old-time's sake
building little huts by the seawall
with beavers in mind
or geese, or,
what's left of them looking at pictures
of things we'll soon forget
on a port so quietly relaxed
relieved of all duty
And in diners,
milk, wine & cheese flow plate to plate
& our songs are understood by sparrows
who've reappeared downtown
as caravans enter from every direction
speaking to great big whales off the cliffs
and real love materializes
recovered from the sea
as new moons pass overhead, one after
the other above a blooming desert
of rosemary and thyme
and even the pigs
what's left of them
can hear our song
April is here,
I'm under vines
and old water jugs
as the sea reaches far beyond the breakers
and water spreads into city-centers
so many of us huddled
on the last-remaining patch of moss
and even the idea of love subsides
as these pictures turn to dead flowers
planted in the straw Earth
we still won't know
what's beyond the day lily's
awful horizon

​Adam Malinowski is a poet who lives in Detroit, MI. He teaches in the Department of Writing and Rhetoric at Oakland University and co-facilitates a poetry workshop at Women’s Huron Valley Correctional Facility in Ypsilanti, MI. His work can be found at Indolent Books, Poets Reading the News, and in Mirage #5/Period(ical) #6.

​About the work: "Prior to 2019, I struggled to find a form in my writing to respond to the atrocity of the current administration and the planetary crises we face. Having been introduced to translation work such as Brandon Brown's The Persians by Aeschylus and Bruce Boone and Bob Gluck's La Fontaine in Rob Halpern's workshop last autumn, I was able to arrive at a form that allowed me to leave myself behind in the interest of responding to our collective condition. In the spring of 2019, I translated all of Rimbaud's Illuminations. In addition to drawing inspiration from Rimbaud, the work draws on my relationship to Detroit, the bodies of water that surround us, and all of my messy friendships and romances."
The Art 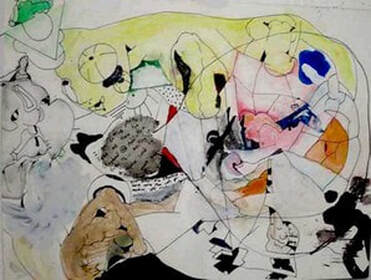 “Finish the Sentence” by Carol Radsprecher, 11x16, ink and acrylic on Claybord(TM), 2010, in a private collection
​Carol Radsprecher was born and still resides in Brooklyn, New York; her studio is in Manhattan. She received her MFA in painting from Hunter College in 1988. Her work has appeared in several solo exhibits: March 2015, in Victory Hall Drawing Rooms; March 2014, in Rogue Community College Gallery, Grants Pass, Oregon; August 2013, in The Alliance Gallery at the Delaware Valley Arts Center, Narrowsburg, NY; in May 2012 in Metropolitan Community College’s Next Gallery; in 2006 at Pierro Gallery at South Orange, South Orange, NJ; in 2002 at the Garrison Art Center, Garrison, NY; in 2001 at Thompson Park Art Exhibition Series. Her paintings and inkjet prints have been included in numerous group shows. She has received several awards for her work and has paintings in many private collections. Reproductions of her work have appeared in literary and art publications (print or online). Her work is in the White Columns Artist Registry.