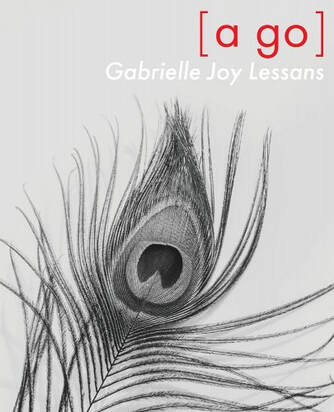 Eye in the Wind (cover image for [ a go ]), by Marie Conlan Krieter, 2022
Reading Gabrielle Joy Lessans’s second book, [a go ], is to follow a string through a maze, a string you never grasp too tightly, a maze that you neither enter nor leave. A maze with no center. Just the act of following. Trust and discovery.

Or: Perhaps [ a go ] is not a single maze but contains many different labyrinths; trace their winding paths to find each poem’s core – and title – as treasure. Or maybe it’s composed of rooms in a sprawling house that bleed into each other, entrances and exits permeable, an exploration of boundaries and interconnectedness. Or, many mini-puzzles that fractal together to conjure a whole. Or, or. Or!

What is it about [ a go ] that makes me want to project these metaphors onto it? Certainly the layout contributes. Lessans traverses the full page, using page breaks, white space, enjambment, and concrete shapes in exciting new ways. She goes beyond traditional line and structure, creating and embodying an exciting form of her own invention, one that’s a pleasure to follow along for the ride as it twists and turns its path across pages and binding. I read the whole thing in one go, [ a go ], unable to put it down, relishing the dizzying effect.

From the opening poem, [ DEBRIS ], Lessans begins teaching us how to read her book. Like many poems here, it spans multiple pages, in this case two. Are we to read straight across? Or complete the left side before diving into the right? The answer becomes quickly apparent, though these pieces are written in enough of a fragmentary but holistic way that your focus can skip around the page and still glean meaning. In fact, the layout seems to encourage this type of flitting attention, of reading hopscotch.
Each poem teaches you how to read it, and no two poems are formatted alike or share the same route, though they certainly echo off each other. In the world of [ a go ], form is intrinsic to structure: each poem’s path is unique. Follow each poem like a trail, hunt down that one lone word that’s strayed to the bottom right corner of the page. And then: Discovery.

Encountering each new poem I let my eyes blur a bit, first look at what shape it invokes on the pages, because Lessans is so adept at building structures that reinforce the poem’s undercurrent with its form, as is the case with [ GORGE ], or [ ALBANY ] here, giving an inverted evergreen tree. 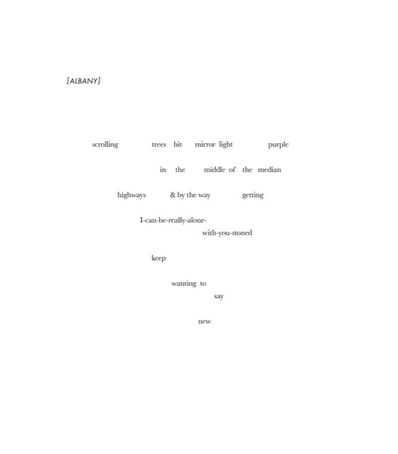 Lessans deploys layout like an architectural blueprint or scaffolding to explore the breadth of each page. Her work is thoughtfully generous in its arrangement, almost greedy in the way it commands space across pages to arrange configurations that contribute to the kernel of each poem’s core. She bends the emptiness, using its silence, its void as a second language to apply pressure to words in unexpected ways simply by their floating or jutted placement, as in [ IDEAS ].
Of course, there are recurring images and themes that bind the manuscript, such as the natural world, quests, the sacred and profane, intoxication, and characters that appear and reappear with no introduction, much as they do in real life. Lessans’s voice, commanding yet gentle, self-possessed and questioning, provides the consistent, binding thread to the experience.

About halfway through, I realized that the transitions between poems can be read as their own mini-poems. Lessans makes one poem bleed into the next, conjuring a third poem from the interstitial, as between [ BRIDGE ] and [ GLIDE ]. 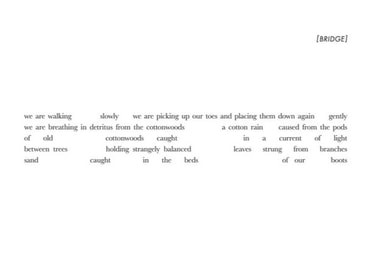 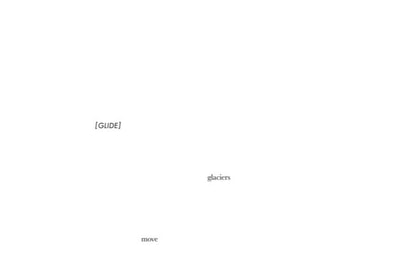 These transitions between poems give [ a go ] a fractured yet wildly cohesive path to follow, a story told in shards.

The shifts between each piece are so seamless, the carefully whittled meandering so subtly directed, that it makes me wonder if the poems were written in chronological order. They don’t feel like they end (or begin); they just morph into what comes next. This in media res could be disorienting upon first encountering an individual poem outside the context of the whole, but they all flow together so well that
​[ a go ] can be read as one long poem.

The way each poem breaks off sends me back searching for the title, which rarely appears in the same place on the page. I begin to read again, letting the piece wash over me with the added context of the poem’s title. A clue. Finding the title feels like winning a prize, the treasure in the center of the maze. Or, as in [ FLOOD ], repeating, sweeping over you again and again to reinforce its theme in embodiment. 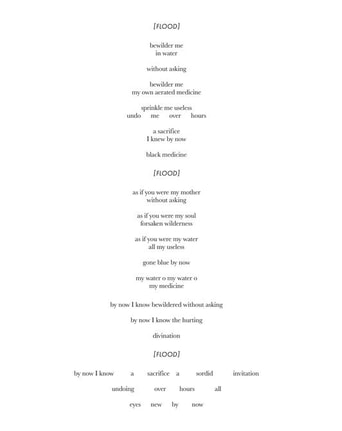 Very few titles are at the top of the page; most are encountered in the middle or sometimes at the end of the poem, or even on the piece's second page, as in [ PETRIFICATION ]. But you start at the beginning and follow in blindly, trusting the meander, until you encounter it:             [ TITLE ]         and suddenly the room opens, illuminated by the key, letting you know where you are going or [ go ]. 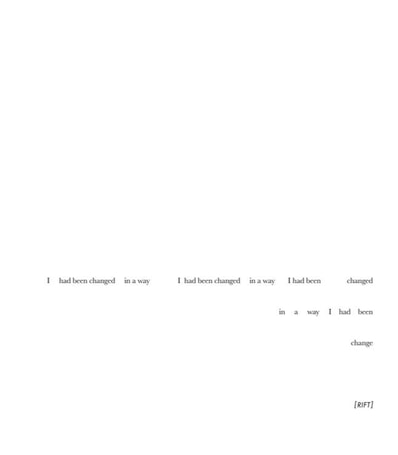 Disclosure: I’ve seen Lessans read in person many times, in intimate settings, so I read these poems hearing them in her spoken voice. When she gives readings, the effect is incantatory, casting a spell over the room, weaving images as sonic textures, pulling you in closer, intoxicating.

The poems range from six pages to essentially a one-line poem that wants its own whole page, traveling the entire canvas of space as it hangs there, suspended, but continuing the chant, as it does in [ FALLOW ]. 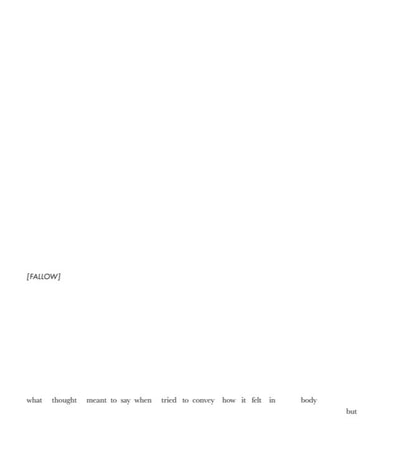 For years a tired old joke has floated around that “poetry wastes paper,” and haters who only quickly flipped through this book could make that claim, but they’d be missing out. For example, the final page of [ POLLEN ] has only two words, but they are earned; not just by the journey that leads to them, but also in how the poem’s complete layout reflects the scattering of pollen on the wind.

Lessans is painting her works with two brushes: one of pigmented text, and one an eraser, creating space, openings. [ a go ] is ultimately an exercise in elision but also cohesive fragmentation. And trust, trust that following the thread, collecting the shards, will lead to a beautiful encounter that can leave you breathless, yet breathing deeply, wanting more.

Gabrielle Joy Lessans is an experimental poet whose writing orients towards the hearth where deep play & healing most intersect. She lives in Denver, Colorado with her husband, son, dog & two kitties, teaching yoga, being a mama & living largely inside her own head. Her first two collections, Bread Of, and [a go] are now available through Ornithopter Press. You can find her at: www.gabbyjoy.yoga

"[a go] was composed as the creative counterpart to a critical thesis on the poetics of friendship. It is a meditation on both desire and relationship as experienced between self & other, self & lover, self & land, self & God, self & Self."

About Gabrielle Joy Lessans' Process in Writing [ a go ]

"The creation process of this collection was mainly a channeling of shape & sound. The poems were all written within about a year of each other, so it really is a gathering of feeling from one particular time, arranged in pleasing ways. It sort of dictated itself until it was done."
About the Author of this Review

Jesica Davis (she / her) is a poet and technical writer from Chicago. She’s an Associate Editor for Inverted Syntax whose work has appeared in Dream Pop, Storm Cellar, streetcake magazine, The Laurel Review, Kissing Dynamite, and other places. Sometimes she makes poemboxes, which are sculptural interpretations of her poems. See j3s.net for more.

"I've never written a book review before (well, not since high school), but I loved Gabby's book so much that I felt moved to do so! It felt organic to take notes as I read it and the piece evolved from there."

About the Author of the Review's Process

"I try and catch sparks of ideas when they appear by jotting them in a notebook. Sometimes this is the most difficult part, being diligent about recording the glimmers. I try to keep a regular schedule for working on poems — not easy when working a full-time job — but it helps to hold space for the practice. When I keep those appointments with myself / my work, I go through the notebooks and mine the ideas to slowly hone them into poems over many drafts. Occasionally a poem emerges almost fully formed, but that's so rare. I have a slightly different process for visual poetry but it's still taking shape."