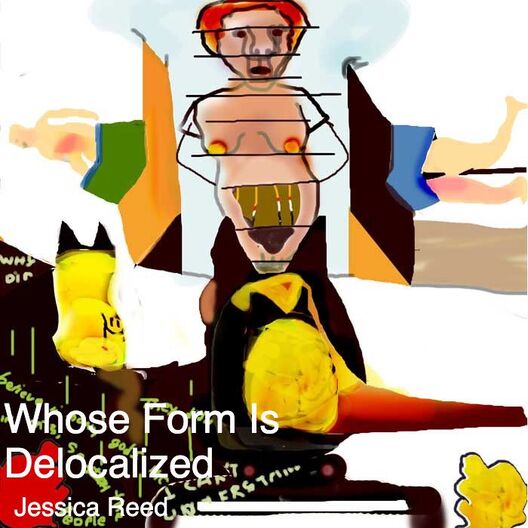 Self is the structure that opposes, and does not strictly exist. A specific ionic bond between specific
pairs of ions, about which we can never speak. Speak only of the solid, of the whole crystal. There
are rules. Self is a forbidden category of being, a figment based around where we spend most of our
time. I can speak this way because I am under glass: I can lie, inhabit other voices, contradict. I can
listen. Pretend. And you, of course, do not exist — you are a projection:

I think of you when I think of dew point, the way blackberries and ripe & abundant combine and then
disappear. Properties, but not the “orangeness of,” only emission lines in the spectra of heated
elements. Time dilation in Beijing. July atmosphere and the nausea of three codeine taken on the
plane. After a week passed, my husband said I didn’t smell like myself. No I, only the new spatial
properties of a hybridization. An optimum distance, a minimum energy point. A lesson in how one
kind of matter is filled with another, and easily astonished. The euphoria of vomiting and a
temperature above which appetite begins to transpose and what any of it amounts to when you can
​defensibly claim that nothing happened.

Toe-curling orgasms in your absence. Goldfinch and cloud chamber and a disagreement about
porcelain babies with nails in their skulls. I can’t help but notice the undersides of leaves, the way the
​tree halves precisely in the wind. Its whiteness underneath. Exposure, and then: a canceling.
More of Reed's poems can be found in Inverted Syntax's Print Issue Two, coming February 2020.

Jessica Reed's chapbook, World, Composed (Finishing Line Press), is a dialogue with the ancient poet Lucretius about atomism. Her work has appeared in Conjunctions, Denver Quarterly, North American Review, Crazyhorse, Colorado Review, Bellingham Review, DIAGRAM, PANK, New American Writing, Waxwing, 111O, Tinderbox Poetry Journal, Spiral Orb, The Fourth River, and elsewhere. She has an MFA in poetry and a BS in physics, and she teaches a university seminar on physics and the arts. She was a finalist for the Omnidawn Revealed Identity Book Prize and a semi-finalist for the Cleveland State University First Book Prize. She lives in Indiana with her husband and chickens.
​
​About the work: “In 2019, I collaborated with a composer and other poets on an extended performance for flute and percussion called The Avian Suite; my part celebrated the dickcissel — a perky, unfortunately named songbird with a black and yellow throat. Also in 2019: photographer Edward Burtynsky’s Anthropocene exhibit devastated me and led to some ekphrastics. Scarlatti’s Keyboard Sonata in A minor (L.378) made me laugh. There is an app that simulates the three-dimensional motion of biological molecules, which entertained and prompted questions about modeling in chemistry. Feminist physics poems emerged around themes of desire and dislocation. And my concept of the self shattered. The two poems in here are the result of that shattering.”
The Art 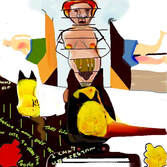 Cat and Woman by Carol Radsprecher , 12"x12" , inkjet print drawn in Photoshop, 2018
Carol Radsprecher was born and still resides in Brooklyn, New York; her studio is in Manhattan. She received her MFA in painting from Hunter College in 1988. Her work has appeared in several solo exhibits: March 2015, in Victory Hall Drawing Rooms; March 2014, in Rogue Community College Gallery, Grants Pass, Oregon; August 2013, in The Alliance Gallery at the Delaware Valley Arts Center, Narrowsburg, NY; in May 2012 in Metropolitan Community College’s Next Gallery; in 2006 at Pierro Gallery at South Orange, South Orange, NJ; in 2002 at the Garrison Art Center, Garrison, NY; in 2001 at Thompson Park Art Exhibition Series. Her paintings and inkjet prints have been included in numerous group shows. She has received several awards for her work and has paintings in many private collections. Reproductions of her work have appeared in literary and art publications (print or online). Her work is in the White Columns Artist Registry. http://carolradsprecher.com.